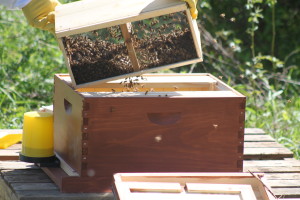 The bees are dumped into our waiting hive. In spite of some nervousness…the whole process went fairly well. 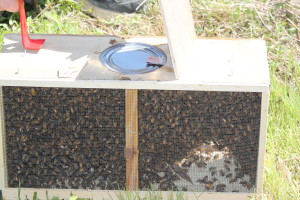 The bees are shipped in a wooden crate like box with a can of syrup to keep them fed. The little tab you see on can is what is holding the queen’s cage suspended in the box

The dream of having our own bee hive at the farm – and of course our own  honey, finally became a reality this past week!  On Friday, we received our package of bees and within a few hours – Mary and I officially became “beekeepers”.

All in all, it was a fairly smooth process – taking only about 15 minutes to open the package, remove the queen and bees and place them into the hive.  We had both went over the process of hiving the packaged bees a hundred times in our head – but that doesn’t mean we weren’t a little nervous heading to the farm with about 8,000 bees in a box in the trunk!

Knowing that calm is a good thing when working with bees – we did our best to stay relaxed (or at least a good fake job 🙂 ). We put on the bee suit and went to work.  We had installed the base and bee-hive structure the previous day in a semi-protected area along a tree line at the farm.  All we had to do now was open the box – remove the queen cage, dump the remaining bees into the hive, and then place the queen in with them.

The queen comes with the bees in a little “cage” suspended from the top of the bee package. On one end of the cage is a wooden plug that once removed, reveals a hard sugary substance. The entire cage is hung in the new hive, and the worker bees will slowly eat the sugar and release the queen. The time it takes this process to occur allows the bees and the queen to become familiar with each other and the bees to accept her as their queen. 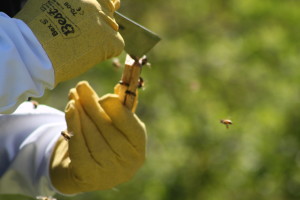 Prying out the wooden plug from the queen’s cage. Once the wood plug is out -t he worker bees will begin to eat through the remaining sugar plug to free her into the hive.

About the only hiccup in the whole process is that I dropped the queen box into the mass of bees when opening the shipping box.   Needless to say, the bees were not very happy with me at that point!  But as they swarmed around me – I tried hard to remember the words of our bee-keeping mentor that “calm is good” – and that I was also fully protected.  I slowly reached in, removed it, and then continued on by dumping the remaining bees into the hive.  Next, we suspended the queen and her cage between the frames, closed it up, and all was well!

For the first week or two, we will supplement the bees with a syrup solution made simply from one part water and one part sugar.  It will provide the new colony with some nutrition while the bees become familiar with the surroundings and begin to collect and bring back pollen to the hive.  That is the yellow jar-like object you see attached to the hive. 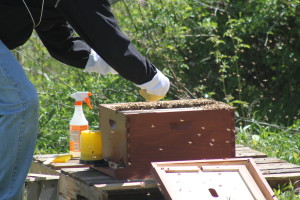 Placing the Queen in the hive

By yesterday afternoon, just about 24 hours after we had released the bees into the hive – you could already see them flying in and out exploring their new surroundings. Most likely, we will be able to remove the feeder soon – especially with as warm as it is, and with plenty of pollen now available for the bees to collect.

It will be exciting to see the activity throughout the summer.  We will wait about 2 more days and then open the hive to make sure the queen has been freed from her cage and that she has begun to perform her duties. After that – we will leave them “be” for a while and let them to their work of gathering pollen and pollinating our crops.  Hopefully, by summer’s ends, we will have added a couple more super boxes to the hive and have some honey to share with friends and family.

Much like the bees, we have been busy as well this week with the early stages of planting – and continued work on the garden and grape vine fencing. 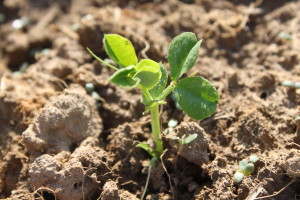 The sugar snap peas emerging through the ground

The radishes, carrots, sugar snap peas, onions, lettuce and kale have all emerged from the ground and are coming along nicely. The asparagus spears have broken through the ground as well. We started our asparagus patch last year with crowns – and now in their second season they are starting to really take off.  We will harvest just a few this year – and leave the rest to grow and become strong.  By next year, we should be starting to harvest a pretty good crop.  We were even able to plant our first 3 cucumbers yesterday in the straw bale garden crate.

This coming week – planting will continue with some of our peppers and zucchini, potatoes and onions will go in – followed by all of our tomatoes and peppers next week.  It’s hard to believe that within two weeks it will all be in the ground!