I think everyone can remember one memory from their childhood that simply meant “Christmas.”

A special tree lit up beautifully each season – a breathtaking Nativity display somewhere in your town – or of course, your local Clark Griswold that lights up the neighborhood with 50,000 bright lights! 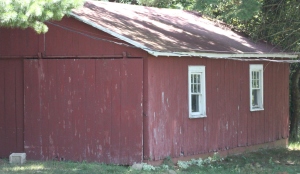 Dads old barn – where Santa would make an appearance each Christmas Season,

For me, it was the huge Santa Claus that my dad would set up in front of our barn each Christmas season.

Back in the early 1970’s, not long after my parents had built their new home in the country – my dad was given a sort of “housewarming gift” from one of his teachers at Pleasantville Elementary, where he served as Principal.  The present was a huge, beautifully painted 8′ Santa Claus with a big waving welcoming hand.  Santa was made from a single 4′ x 8′ sheet of plywood and a few 2 x 4’s – and he would serve to ring in each Christmas season at my parent’s house for the next 40+ years!

Dad found the perfect spot for Santa – right between a set of two young pine trees that he had planted in front of his barn – and each year he would set him up and then light him with a spotlight for all to see.

Santa became sort of a landmark in our neighborhood at Christmas time – and also a great way to give directions to those coming to the house –  “just come over the hill and our house is the one on the right with the huge lit Santa in front of the barn.”  I can’t tell you how many times we gave those simple directions out growing up.

After my father passed away in 1983 – my brother and I, along with the help of our brother-in-laws continued on with the tradition – watching as those two tiny pine trees became towering 60′ trees on either side of Santa.

I think everyone of my family members have in one way or another helped continue Santa’s tradition – a few have repainted him a couple of times – and all of us have helped to set him up at one point or another – more importantly, re-set him up after a snow or windstorm would take him down.

Santa at his new place at the farm

I remember many times when my brother and I would think we had him totally secured – only to see poor Santa laying flat on his back the next morning! All in all, Santa always came through with flying colors.

When we disassembled the old barn a few years back to rebuild our barn at the farm – Santa found a new home at my sister’s house – to continue his tradition of waving to passerby’s each holiday season.

But it was earlier this summer, that she called me one day and asked if I would like to have him to be near his barn once again. And of course – the answer was “YES!” 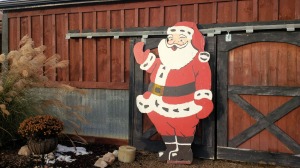 Santa posing for a picture in front of the barn

And so it is that Santa has returned to be near his barn that he spent the first 40+ years of his life. I have to say – it was a pretty special moment for Mary and I to put him up at the farm.  After trying a few locations out – we settled on putting him at the top of the farm overlooking the barn below – so that he can still wave to all of those that pass by.

Oh – and with age does come a little wisdom – Santa is now put up with a 6 x 6 post and heavy duty screws – we will see if he now stays put! 🙂

Here is to a wonderful Christmas season! Jim and Mary