It’s Spring, and that means seasonal allergies are hitting people head on like a Mack truck! Pollen counts in the Spring can reach ridiculous levels as trees, shrubs, bushes and more begin to flower. And that means all kinds of problems for those who suffer from season allergies. 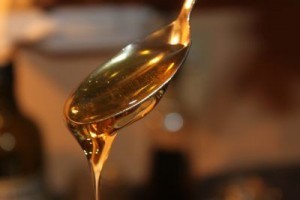 Local Honey – A teaspoon a day can help keep the seasonal allergies away!

In our own family, Mary has always had an issue each Spring. I do as well, although with a few less severe symptoms. But those symptoms are nothing short of annoying. Itchy eyes, sneezing, runny nose, and a feeling that can only be described as blah! But about 5 years ago, that all changed.

It was the winter of 2011 -2012, and we had taken a few beekeeping classes to prepare for our first hive of bees at the farm. A single conversation with an old-time beekeeper changed it all.

In talking about all of the benefits one gets from raising bees, he mentioned how it helped cure him of his Springtime allergies. As he described it, it was more of a vaccine that anything.

He said that every year, starting a month or so before Spring hits, he takes a teaspoon of local honey every morning. He went on to describe that local raw honey was the key. It worked, he said, because it built up immunity in your system to the pollen the bees were collecting. That is the same pollen, from the very same trees and plants that cause us problems each Spring.

I have to admit, both us were a bit skeptical. Okay, a lot skeptical! But you know, we kept asking other beekeepers, and they would all tell us the same thing. So we decided to give it a shot. Quite simply, it worked wonders!  See : 5 Amazing Honey Bee Facts 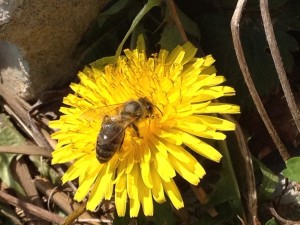 Honey bees collect the very pollen that makes have our allergies

That first year, starting in late February, we both put a teaspoon of local honey in our coffee each morning. As crazy as it sounds, as Spring hit in full force, neither of us were suffering from anything.

For Mary, it had always been a daily dose of Allegra to help her get through the season. And I would have to take a few now and then when symptoms came on as well. That year, there was not one single dose of anything taken in our house, except for honey.

It was truly amazing. In the last few years, others in our family have now caught on to the magic as well. My brother, like Mary, always had bad seasonal allergies each spring. He is now a BIG believer in local honey.

Learning A Lesson About Seasonal Allergies

As if we needed anymore proof, we pretty much cemented our belief that it works last year. With the old house sold, the new house under construction, and living in a temporary home, life got hectic. We were switching out hives and had no honey of our own, and failed to get some from another local beekeeper. We both simply stopped the ritual that had worked for so long – and paid for it. Let’s just say that last year was the first year in a long time that Allegra made it into our house!

So, this year, it has been back to the honey routine, and back to zero issues. I still love it when people look at you a bit funny when you try to tell them it really does help with seasonal allergies. All we can say is, thank you to our friends the honey bees!

Now – if only local honey could cure poison ivy for Mary!