Looking for ways to protect cucumber plants from the onslaught of beetles and disease?

Cucumbers are the second most popular vegetable grown in home gardens, playing second fiddle to only the beloved tomato. Gardeners everywhere simply love to grow and eat them! 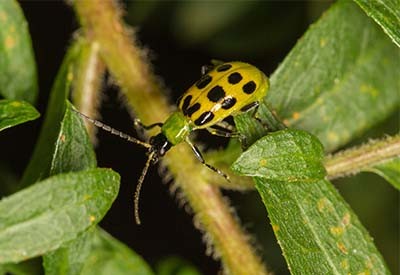 They are the perfect for salads, relish trays, eating fresh, and of course, making pickles! We even use them to make an incredibly delicious and tangy Cucumber Vegetable Dip Recipe. See: Tzatziki Sauce Recipe

But although they are popular to grow, they are also highly susceptible to pests and disease.

A single bite from a cucumber beetle can spell the end of the line for an entire cucumber plant. If that wasn’t enough, they can easily fall victim to powdery mildew as well.

But don’t be alarmed, with a few simple steps, you can safely protect your cucumbers plants from the dangers of all three.

How To Protect Cucumber Plants From Beetles and Disease

The cucumber beetle is by far the most dangerous and destructive pest to cucumber plants.

The most commonly found and recognized cucumber beetles are the black and yellow species. They have many variations, including both spotted or striped backsides, and several patterns in between.

Their body style somewhat resembles a cross between a ladybug and a lightening bug. 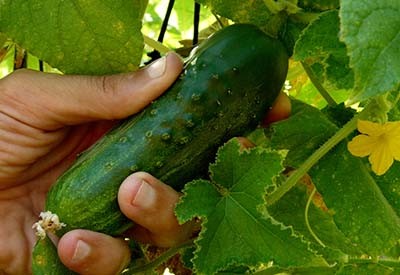 With a little effort to protect cucumber plants, you can easily be picking great cucumbers all summer long!

Cucumber beetles first cause damage to the tender leaves of young plants. As the they progress, then move on to chewing blossoms and flowers as well. They will even happily bite into the flesh of the cucumber.

The chewing damage is bad enough, but even more destructive, they carry and transmit bacterial wilt to plants.

If you have ever had a seemingly beautiful plant begin to quickly die and wither, it has more than likely been infected with bacterial wilt. It can decimate an entire crop quickly.

So how do you protect against it? Here are some of the most effective strategies:

Row Covers :  Row covers are the absolute best line of defense when it comes to keeping cucumber beetles from ruining a crop. If you have serious issues with beetles, this is the way to go.

They are a small investment, but row covers can be re-used from year to year. They also can be used effectively in the fight against cabbage moths and worms, and in early spring for frost protection. 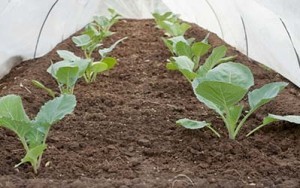 Plant Sacrificial and Repelling Crops : Many successful growers will plant sacrificial plants that the beetles love nearby their cucumber plants.

Allysum, Zinnias and Pumpkin vines are all excellent sacrificial crops. Beetles prefer them even more than cucumbers, so they tend to stick to attacking them.

It makes them easy to spot and destroy, and gives a fighting chance for your cukes.

You can also plant repelling crops that beetles dislike such as radishes, oregano, and nasturtiums. Plant them right with your cucumbers to help repel the beetles away.

Hand Picking : Old fashioned, yes, but it still works! Head to the garden in the early morning hours and remove beetles by hand. If you happen to have chickens, they will appreciate the snack!

Beyond the destructive forces of the cucumber beetle, powdery mildew can wreak havoc on cucumber plants as well.

When it comes to powdery mildew, the key is prevention. Once you see the tell-tale white spots forming on leaves, it is usually too late to help the plant. Here are some great tips toward prevention:

Plant In A Sunny Location : For starters, plant your your crop in an area that receives at least 8 hours of full sun. This will also allow leaves and vines to dry off from early morning dew. It can make a big difference in keeping mildew and blight at bay.

Never Water At Night: When watering your plants, water early in the morning, and never at night. Watering early allows the plants to dry off quickly.

In addition, water at the stem of the plants so water goes directly to the root zones. Try to not leave the leaves soaked, as this can promote mildew and blight as well.

Mulch Plants : Keep the area under your vines mulched to provide protection from the soil and soil borne disease.

Milk Spray: If you are looking for an all-natural solution, milk might just be the key! A 50% solution of milk and water applied to the plant’s foliage once a week, or after a heavy rain, has long been known to be an excellent remedy against the onset of powdery mildew.

Begin applying once the first few leaves begin to form on your plants, and continue until early summer.

Here’s to growing a great crop of cucumbers! – Jim and Mary!