This recipe makes the absolute BEST Beef Tenderloin that I have ever had! Seriously, ever! 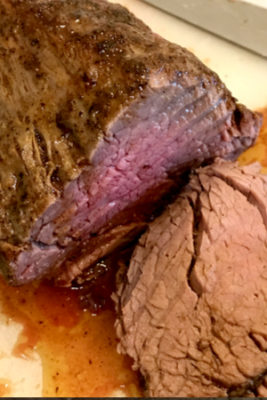 Every time that I get invited to a special occasion dinner I get so excited. I love spending time with family and friends at a beautiful venue.

There is just something about getting dressed up and sitting down for dinner at a round table that is beautifully set and decorated.

As a guest, there are no chores that have to be done, therefore you can truly sit and enjoy the company around you.

In addition, the menu items served at these events are absolutely incredible!

As much as I love a full service meal that is served at the table, I love buffet style meals even better! 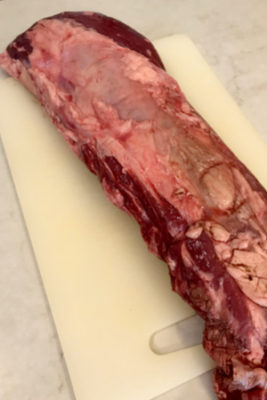 Primarily because it gives me a chance to fill my dinner plate with little samples of everything.

From different types of salads, side dishes and the main course, I can choose whatever appeals to me the most at that time.

This type of meal is where I enjoyed my first slice of Beef Tenderloin.

Because it was my first taste, of course I thought it was the BEST Beef Tenderloin that I had ever had!

But to be perfectly honest, it was truly the best cut of beef that I had ever tasted. 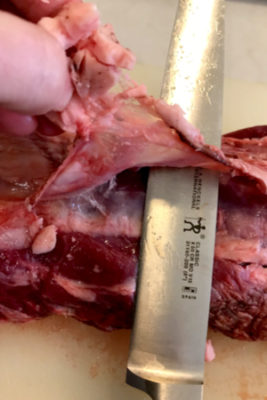 Trimming the fat and sheath off of the tenderloin.

I was lucky enough to have received the center cut portion where it was cooked to medium-rare. It had a light pink hue throughout the center and the exterior was golden and crusty.

No knife was needed. It literally pulled apart with just a slight tug of a fork.

The meat literally melted in my mouth. In fact, to this day, I am not sure I even had to chew it that night.

That is when I knew that I would have to find a way to replicate the recipe.

However, I ran into a slight problem. I couldn’t find it in my grocery store.

I searched and searched the beef aisles and came up empty every time. So I finally went to the butcher counter to ask about how to purchase the Best Beef Tenderloin to make for Christmas dinner. 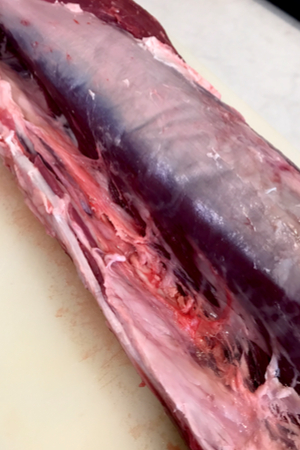 Cut the side piece of meat off of the tenderloin and use for other recipes.

Once I finished my long story on how I fell in love with beef tenderloin, the kind man asked me if I was looking to purchase trimmed or the whole beef tenderloin cut.

Trying not to look like a novice, I told him that I wanted it trimmed and ready to be put in the oven!

I was so proud of myself until he brought out just what I requested. In front of me was the most beautiful 5 pound beef tenderloin that I had ever seen.

Until I saw the price!!!!! I think I almost had heart failure!

The price was over $19.00 per pound.  I quickly did the math in my head and  figured that this cut of meat would cost me about 100 dollars!

My pride went out the window and I began to ask the Butcher a million questions! 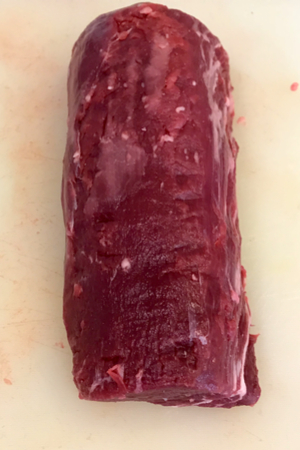 Trying to sound a little refined, I began the conversation by asking where this cut of beef comes from.

He kindly took the time to explain that it is the muscle that sits beneath the ribs, next to the backbone. Because this muscle does little to no work, it is the most tender cut of beef.

In fact, this is the same cut of meat that they use to make filet mignon steaks. Now I was beginning to understand.

I think he could sense the panic in my eyes when I saw the cost of the beef tenderloin. Or maybe it was the beads of sweat that popped up on my forehead during the conversation. 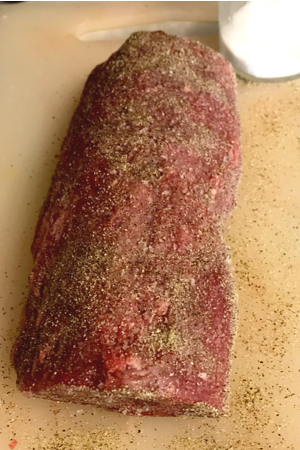 Only salt and pepper is needed to make the best beef tenderloin.

He went to the back of the meat counter and brought me a long cut of meat. I was intrigued on how this was going to cost me less.

He went on to explain that by purchasing an untrimmed beef tenderloin, it would cost me about $11 per pound, an $8 per pound savings.

So what was the catch?

Of course, the savings in cost comes from the Butcher not having to trim the fat and lining from the meat.

That chore will now be passed along to me, hence the cost savings.

And although this was still a pretty penny to spend, it was a once a year special occasion meal.

So I bit the bullet, and came home even more determined to make the absolute BEST Beef Tenderloin there ever was! 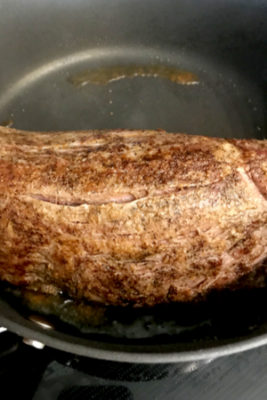 Before it goes in the oven, brown the tenderloin on all sides to trap in the moisture.

Because I had never attempted trimming a beef tenderloin before, I quickly turned to you tube.

After a few videos, I knew that it wouldn’t be hard, just time consuming.

My first task was to cut the fat and silver lining off the the meat. This took awhile, and patience was much needed.

Once the first few layers were removed, there was a side cut of meat that was exposed. This piece also gets cut off and can be used for other recipes.

And because I wanted to make the best beef tenderloin recipe, I knew that I would only be using the center portion of the meat. 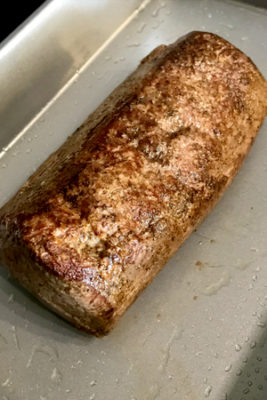 Once the tenderloin has been seared, place it in a rimmed baking dish.

This portion is the thickest and most even in size as compared to the top and lower portions, known as the head and the tail respectively.

After a good 45 minutes of trimming, I had the exact cut of beef that the Butcher first brought out to me, at a fraction of the price.

In addition, I had other cuts of meat that I could use for steaks, stews, stir-fry and more!

So what is the secret to making the BEST Beef Tenderloin? Keep it simple!

There are only a few crucial steps to make this tender cut of beef the best ever! 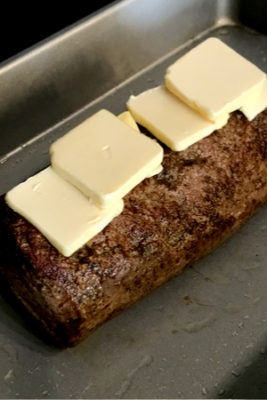 Adding a few teaspoons of butter to the top will make the tenderloin even more flavorful!

First of all, start with the beef at room temperature. If you take it out of the refrigerator and throw it in the oven, it will be almost impossible to get the center done without the exterior becoming tough.

Secondly, be sure to sear the meat before it goes in the oven. Brown it on all sides and on each end to trap the moisture inside.

And the most important tip of all – use a digital food thermometer to cook your meat to a temperature no higher than 130 degrees F.

Once you remove it from the oven and let it rest, it will continue to cook. The center portions will be medium-rare and melt in your mouth tender. 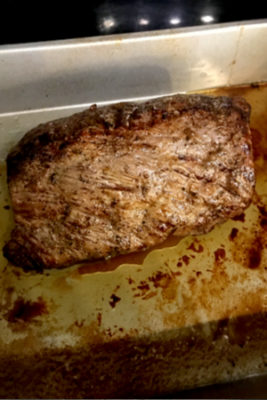 Take the tenderloin out of the oven when the center internal temperature reaches 130 degrees F.

By following these insanely easy steps, you too can make the BEST beef tenderloin in your own kitchen!