It was the great potato crate experiment Charlie Brown! If you spend any time at all on Pinterest or Facebook – you have no doubt read the hundreds of articles on how to grow your own potatoes vertically – in anything from a garbage can to a barrel or basket. 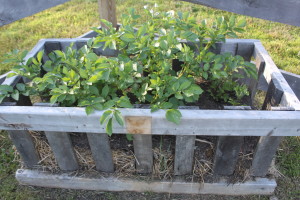 We have always grown our potatoes the more “conventional” way – planted in our long raised rows of soil.  However, always willing to try something new – we thought this year we would give “vertical growing” a stab and see what it is all about. We called it the great potato crate experiment. Not ready to give up the proven results of the row method – we still planted our traditional rows – and then trialed a few crates to compare.

Before I go further – any of you who have grown potatoes know that they key is to keep soil mounded around the tops of the plants.  It can be tedious work at times – not to mention it can be difficult to find enough soil to keep mounding up on the rows. However, with all of that said – in general, we have always been happy with the results – usually netting about 5 to 8 pounds of potatoes for every pound we planted.

It took minutes to lift the crate and harvest the bounty of potatoes!

We had built wooden growing crates from pallets a few years back that we had filled with straw bales and soil to grow extra cucumbers, zucchini and tomatoes against the garden fence. (See: How To Build Straw Bale Growing Crates)  So for our potato experiment this year- we used a few to try it out.

Planting was as simple as filling the bottom of the crate with a few inches of straw, leaves and soil – and placing in our potato cuttings. We covered them with soil and in a matter of minutes we were done. I have to say, it was much easier than the hoeing of the rows for our standard potato row plantings.

The straw bale crates were not large – in fact – we could only fit about 8 to 9 cuttings at most into each – but at least we could get an idea if this really worked.

As the season progressed – we continued to fill up the crates with a mix of soil, compost and straw until the potatoes had grown to the top. In our rows we did the same – hilling up over the potatoes until we could hill up no more.

Around mid July – the tops of the potatoes in our rows were the first to brown off – signaling it was time for digging.  Although not horribly difficult work – it took us around 90 minutes to harvest a double 50′ row. It was a decent harvest – about 2 to 3 bushel of medium sized potatoes.  I do think the over abundance of rain and the cooler weather this year held down the harvest a bit.

Fast forward a few weeks and it was time to harvest the crates as they began to brown off as well.

The purple potato harvest from the crates – big and bountiful!

So there we stood – ready to find out just how well this growing experiment would really work.  With a fairly easy lift of the crate – the loose soil came crumbling down – and with it – a half-bushel of potatoes came rolling out – most of which were much larger than any that had grown in our rows.  In what amounted to a total of about 3 minutes – we had harvested the entire contents of the crate.  It was pretty easy to see that the crate potatoes – grown in a much looser mix of compost, straw and soil were the winner!

All in all – we were both pretty amazed at the results.  We figured if we had grown all of our potatoes the crate way – we could have had about 8x’s the harvest of the row method.

The future of our potato growing…

In the small amount of time it took to plant our crates – and the ease in which it worked throughout the season (no weeding, easy to add soil – and simple harvesting) – we will now grow all of our potatoes next year above ground. It’s far too simple and too easy not to do!

We will however make a few changes. Instead of growing in the straw bale crates we had on hand – we are going to build a bit longer and shorter pallet crates that we can stack on top of each other as the potatoes grow – creating a larger harvest. (potatoes will continue to grow vertically as long as they are covered in soil) We have two open sections at the top of our garden against the fence – and figure we can grow twice the potatoes we grew in the rows with just these two areas of crates.