One of the most popular garden vegetables used in home preserving is the cucumber – especially with the intent of making crisp pickles.

Cucumbers are considered easy to grow, are abundant on the vine, and can be turned into pickles without much difficulty.

The trick is knowing how to make crisp pickles. There’s nothing more frustrating than taking the time and effort to can pints after pints of pickles, only to find out several months later that each and every pickle is soft and mushy.

There are many methods that people have tried, and swear by, to guarantee that you will end up with crisp pickles.

For us, the simple secrets used below, result in fresh and crunchy pickles in each and every bite.

Picking the right type of cucumbers is crucial to ensure you end up with crisp pickles. We get questions all the time on what is the definition of a pickling cucumber.

When it comes to making pickles, there is a big difference between pickling cucumbers and salad cucumbers.

First of all, most pickling cucumbers are shorter and thinner than the salad variety.  They have a small seed core and typically have a thick and bumpy skin texture.

They tend to be more crisp, and therefore, when used correctly, make for crispy pickles.

Pickle the Day of Picking:

The best time to pick cucumbers is early in the morning (before 9 a.m.) but not before the morning dew is primarily gone off the plant.

The time of day you pick your vegetables affects the taste and storing quality of the crop. Vegetables harvested in the morning generally are sweeter, crisper and juicier than those picked at other times.

This is because as they rest in the garden overnight, vegetables tend to replenish the moisture lost during the day. Picking mid-day will result in soft cucumbers that make soft pickles.

Trim Off The Blossom Ends Of The Cucumbers:

The blossom end of cucumbers produce an enzyme that can make the pickle soft and unsafe to eat after pickling.

You must cut at least 1/16 inch off the blossom end if you want to end up with crisp (and safe to eat) pickles.

It’s easy to tell which is the blossom end if you’re harvesting cucumbers from your own garden. When picking, leave a little of the stem and you’ll know that the blossom was on the opposite side of the cucumber.

However, if you buy cucumbers from the farmer’s market or store, they most likely won’t have any stems.

Find the blossom end by looking for the rough dot (instead of the smooth, indented dot) at the ends.

Make Your Own Pickling Spice:

Yes, you can buy pickling spice in those neat little packets in the store, however, you must be careful what ingredients are in the packet.

Many store-bought crisp pickle packets contain cinnamon – which is thought to soften pickles greater than other spices. A little cinnamon may be ok, but we avoid it all together by making our own spice packet.

When canning pickles, you must not over process them in the hot water bath.

For instance, if you are using a hot brine, make sure that the water bath is already boiling before pouring the brine over your jarred cucumbers. Quickly pour in the hot brine, remove air bubbles, add the lid and seal and insert immediately into your hot water bath.

Once the required processing time has been reached, remove the jars from the water bath immediately. Over processing them will lead to cooked pickles, not crisp pickles.

We have tried several different tips and tricks over the years to get that perfect crunch in every pickle. Here are a few other secrets and recipes that you might find helpful before you begin your pickling process this year:

We hope you enjoyed this week’s Recipe Tip of The Week.  If you haven’t had a chance yet, be sure to check out our book Growing Simple.

The Adventure Of A Lifetime 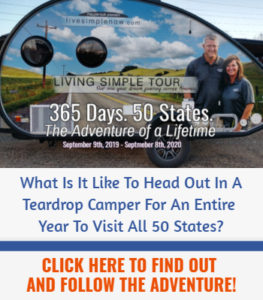